The museum recently received this lovely group of medals into the collection, kindly donated by the grandson of the recipient.

These medals belonged to 17738 Private Harold Oliver Adlam, who served in the 2nd Battalion and 15th Battalion of the Hampshire Regiment during World War 1.  The group comprises the Military Medal, the 1914-15 Star, the British War Medal and the Victory Medal.

The 1914-15 Star, the British War Medal and the Victory Medal are often referred to as “Pip, Squeak and Wilfred”, after the characters in a long-running comic strip in the Daily Mirror. The comic strip was launched around the same time as the medals were issued in early 1920, and the nicknames stuck.

Private Adlam was awarded the Military Medal for gallantry while serving with the 15th (Service) Battalion, Hampshire Regiment in 1918. Few citations survive for gallantry awards, but the museum is fortunate enough to also hold the notebooks of the Commanding Officer of the 15th (Service) Battalion, Lieutenant-Colonel C D V Cary-Barnard, detailing all his recommendations for awards from his men. We looked up Private Adlam’s citation and it reads:

‘ 17738 Pte Harold Adlam.  For great gallantry and devotion to duty during the operations at MORY, BIHUCOURT + GOMMECOURT March 25th when he handled his Lewis gun with great coolness under heavy fire and inflicted heavy losses on the advancing enemy at close range. His conduct throughout the whole operation was excellent while the fine example he set on this occasion had a good effect on all ranks. Recommended MM 6/4/18′. 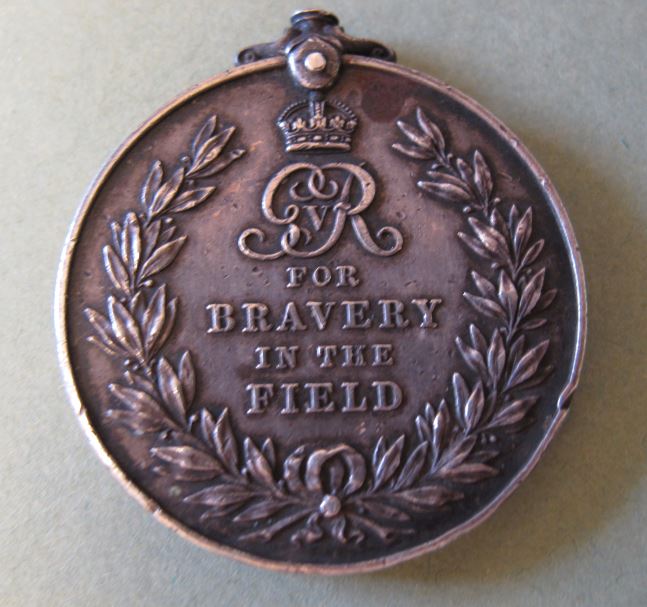 Harold Adlam was born on the 20th November 1893 in Clanfield, Hampshire. He worked as a shepherd on a local farm prior to joining the army. He first entered a theatre of war on the 5th December 1915, when he went to Gallipoli.

The front and reverse of the 1914-1915 Star awarded to Private Adlam. This was awarded for service in Gallipoli, and has the initials of the King – George V at the bottom of the front. Medals were stamped with the recipient when they were issued – stars were stamped on the reverse, as shown here. Medals with patterns on both sides were stamped around the edges. As you can see, the letters and numbers do not have regular spacing; this is because they were stamped by hand with each individual letter and number being added separately.

The reverse of the Victory Medal – hence why the First World War is often referred to as “The Great War”.

The reverse of Pte Adlam’s War Medal.  This is the side of the medal that is rarely seen as it is against the uniform when worn. The medal depicts the victorious St. George on horseback trampling over the Prussian shield; the skull and cross-bones are a commemoration of all those who lost their lives during the war. Around 6.4 million of these medals were issued to British and Commonwealth personnel which shows the enormous scale of the war.